Lebanon joined the CERN family in 2016 through the signature of an International Cooperation Agreement. This triggered a strong development of the country’s contributions to CERN projects, particularly through the affiliation of four of its top universities to the Compact Muon Solenoid (CMS) collaboration (link). Unfortunately, the country is dealing with an unprecedented economic crisis, food shortages, and the COVID-19 pandemic, all in the aftermath of the Beirut port explosion on August 4. Even the most resilient higher-education institutions in Lebanon are struggling to survive. Despite these challenges, the Lebanese scientific community has reaffirmed its commitment to CERN and CMS.

To support Lebanese academics a technology transfer project has been initiated to build up the research capacity of the country: High-Performance Computing for Lebanon (HPC4L). This project will make use of servers donated by CERN to Lebanon and train Lebanese personnel at CERN using financial resources secured through a dedicated Fundraiser (link). This initiative will result in the setup of the first High Performance Computing facility dedicated to research of the country. HPC4L is designed to enable computing capacity development to support various research activities, including High Energy Physics and other scientific disciplines. The objective is also to transfer CERN and CMS knowledge and expertise to train a dedicated support team based in Lebanon that will run the HPC facility there. This HPC center will bring together top higher education institutions (Public and Private) and will serve as a coordination hub for cooperation and communication across local key research players.

But What is High Performance Computing in General (HPC)?

High Performance Computing is a state-of-the-art notion about grouping the computational power to supply a much higher performance than what could be achieved from a typical PC or workstation. If an ordinary Control Processing Unit (CPU) in your laptop can calculate various operations in a relatively short amount of time, then imagine what thousands of these processors aggregated together could do!

An HPC facility will have processor units connected together in such a way that it could be considered as a single computer. In fact it is a super computer! For this reason the terms high-performance computing and supercomputing are sometimes used interchangeably.

The below picture shows CERN's data center as the heart of CERN’s entire scientific, administrative, and computing infrastructure. All services, including email, scientific data management and videoconferencing use equipment based in the data center are computed by some 90,000 processor cores and 10,000 servers hosted in its three rooms that run 24/7. 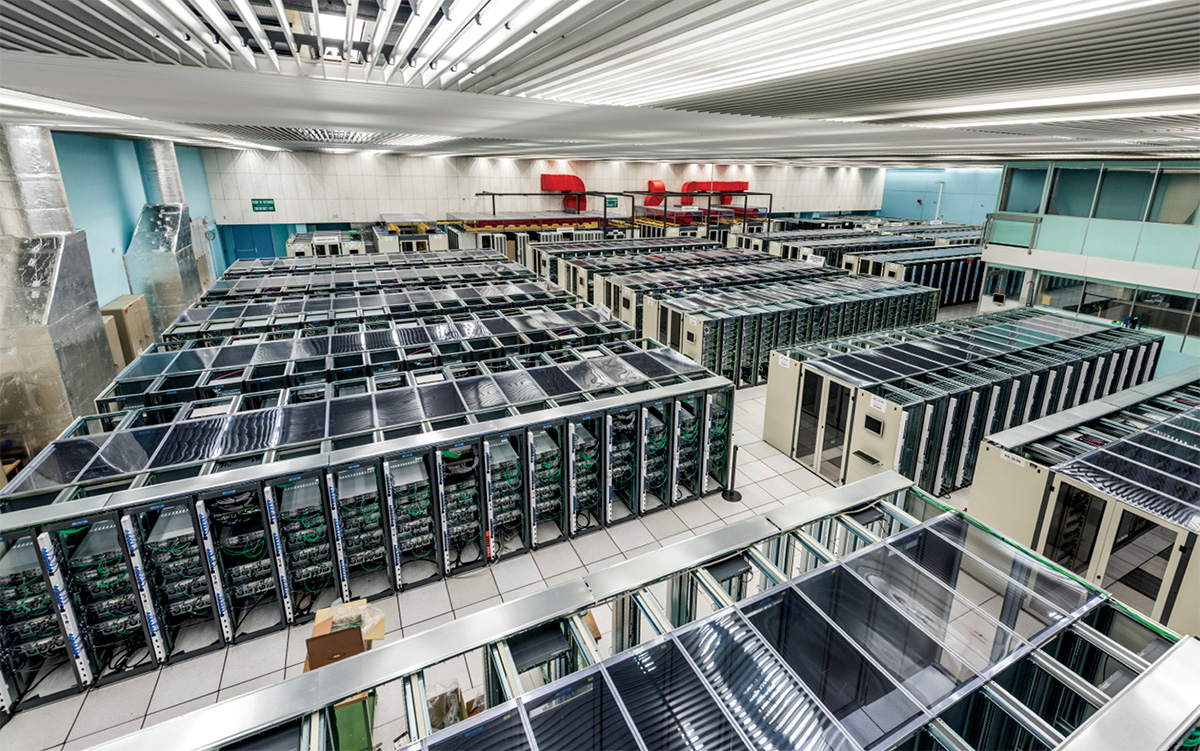 Overview of The WLCG

Data pours out of the Large Hadron Collider (LHC) detectors at a blistering rate. Even after filtering out 99% of it, in 2022 we're expecting to gather around 50 petabytes of data. That's 50 million gigabytes, the equivalent to nearly 15 million high-definition (HD) movies.

The scale and complexity of data from the LHC are unprecedented. This data needs to be stored, easily retrieved and analyzed by physicists all over the world. This requires massive storage facilities, global networking, immense computing power, and, of course, funding.

CERN does not have the computing or financial resources to crunch all of the data on site, so in 2002 it turned to grid computing to share the burden with computer centers around the world.

The result, the Worldwide LHC Computing Grid (WLCG), is a distributed computing infrastructure arranged in tiers – giving a community of over 10,000 physicists near real-time access to LHC data.

If you have any further interest in how the WLHC works, check out the YouTube video below from CERN!

You can also have a look at the official CERN website about the WLCG here.

How does the WLCG Work?